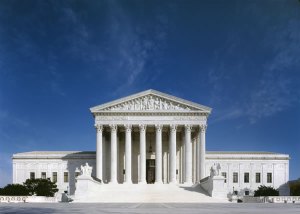 This week the Supreme Court began hearing arguments in the Hollingsworth v. Perry case (aka. Proposition 8, aka. Legalizing Gay Marriage). Many feel this is a political issue while others feel it’s a deeply religious issue, but for certain it’s a very divisive issue.  Many Christians have been accused of hate and bigotry at every turn for opposing gay marriage, but that’s not the reason Christians (or at least the ones I know) oppose gay marriage! It’s because of love.  Let me explain.

Also at issue is the Defense of Marriage Act which was drafted and passed by the 104th United States Congress and signed into law by President Bill Clinton in 1996.  The main point of the law reads as follows:

Section 3. Definition of marriage In determining the meaning of any Act of Congress, or of any ruling, regulation, or interpretation of the various administrative bureaus and agencies of the United States, the word ‘marriage’ means only a legal union between one man and one woman as husband and wife, and the word ‘spouse’ refers only to a person of the opposite sex who is a husband or a wife.

Proponents for gay marriage want basically two things. 1) To have Proposition 8 ruled unconstitutional in the state of California, 2) A Federal ruling legalizing gay marriage nationwide (similar to the Roe vs. Wade ruling) and giving them “equal protection” under the law for the same rights as heterosexual married couples.

I do not support gay marriage and it’s not because I’m a homophobe, a bigot, or that I hate some group of people…it’s quite the opposite.  Look at what the Bible says:

1 Corinthians 6:9-11 NIV – 9 Or do you not know that wrongdoers will not inherit the kingdom of God? Do not be deceived: Neither the sexually immoral nor idolaters nor adulterers nor men who have sex with men 10 nor thieves nor the greedy nor drunkards nor slanderers nor swindlers will inherit the kingdom of God. 11 And that is what some of you were. But you were washed, you were sanctified, you were justified in the name of the Lord Jesus Christ and by the Spirit of our God.

There are several other verses I could reference, but this verse sums up all others very nicely.  First of all this passage very clearly states that “men who have sex with men” (or homosexuals) will not inherit the kingdom of God.  Is the Apostle Paul trying to single out homosexuals and turn them into some sort of unforgivable monsters out to destroy everyone? NO!  Notice who else he points out, the sexually immoral (anyone who has sex outside of a marriage between a man and a woman!), thieves, greedy people, drunks, slanderers, and swindlers!  Paul isn’t singling out homosexual behavior as unforgivable…quite to the contrary! He indicates in verse 11 that the Christians in Corinth used to be involved in the very same sins he listed, and they had been forgiven!

I do not stand in opposition of gay marriage because I hate gay people.  I don’t!  Paul didn’t stand in opposition to the practice of homosexuality because he hated gay people.  He didn’t!  God doesn’t forbid homosexuality because he hates gay people.  He doesn’t!  In fact God sent his only son, Jesus, to die for the gays, the straights, the drunks, the sober, the murderers, the peace keepers, the adulterers, the faithful spouses, the liars, the honest…you see my point.  Jesus died for all so that all people everywhere, regardless of their past failures, could be saved!  And until Christians fully understand this, embrace this, and live this, and share this fundamental truth of our faith we will be misunderstood by many as homophobic and hateful people.  In large part, we Christians haven’t been doing a good enough job of sharing the love of Christ with others, and we must fix that problem NOW!

I have had very good friends in my life who were alcoholics.  I love those friends and care about them, so much so that I don’t support their drinking.  It’s bad for them…it hurts them whether they see it or not.  God tells us that it hurts them spiritually and that sin separates them from a right relationship with God.  That’s the worst part of drunkenness!

I have had very good friends in my life who were gay.  I love those friends and care about them, so much so that I don’t support their homosexual lifestyle.  It’s bad for them…it hurts them whether they see it or not.  God tells us that it hurts them spiritually and that sin separates them from a right relationship with God.  That’s the worst part of homosexuality!

1 Timothy 2:3-6 NIV – 3 This is good, and pleases God our Savior, 4 who wants all people to be saved and to come to a knowledge of the truth. 5 For there is one God and one mediator between God and mankind, the man Christ Jesus, 6 who gave himself as a ransom for all people. This has now been witnessed to at the proper time.

So there it is.  Christians love others and wish for them to do what is right in the eyes of God.  We’re imperfect people trying to live out and teach others a message of perfection…and that’s pretty difficult to do!  Do we always get it right?  No.  Are there some Christians that come across as hateful?  Unfortunately, yes.  Does that mean that we are all hateful people?  Not at all!

Christians have truly messed up big time in spreading the message of the Gospel!  When people feel the reason we don’t support something is because of hate towards other people, they don’t understand the love of Christ, and that’s our fault!  We must show the love of Christ to all people at all times and in all situations, while remaining faithful to God’s commands.  Let’s get to work!

What are some ways you feel Christians could do a better job in showing the love of Christ to others?